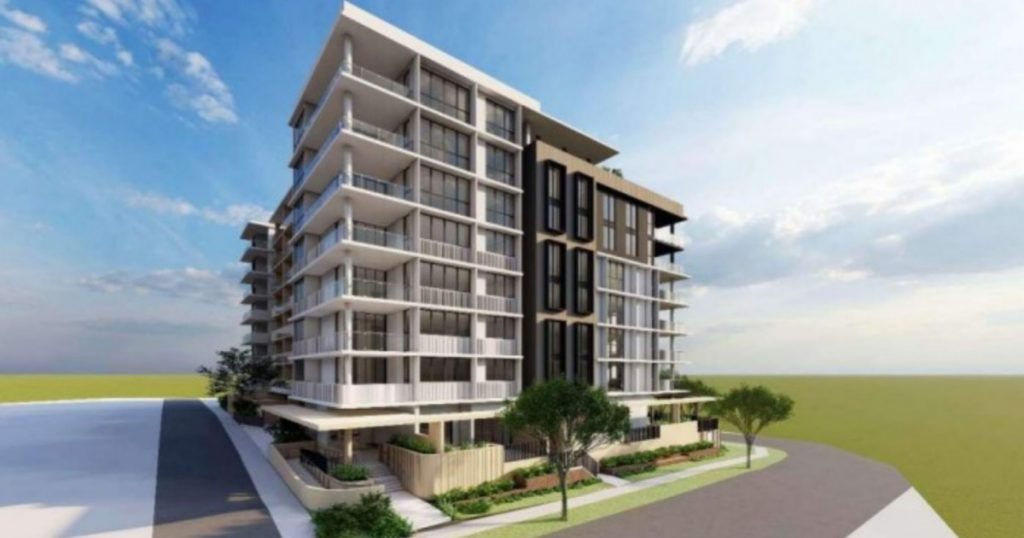 Stockwell Development Group has lodged an application to build a nine-storey residential building on Kurilpa St in West End.

The residential dwellings , consisting of 78 two-, three- and four-bedroom units, will take up eight levels, with each storey consisting of individual private balconies or courtyards facing the streets.

The subject site is on a 2365sqm corner site spanning four lots at 4, 6 and 8 Bailey Street and 10 Kurilpa Street. It’s currently occupied by warehouse buildings which will be removed once the application is given the green light.

It would have a rooftop communal space, which would have a swimming pool, barbecue, recreational areas and pergola.

Designed by MODE Design, the plan incorporates Buildings that Breathe principles, with landscaping and deep planting zones proposed “to ensure the interface contributes to an attractive streetscape.”

It would also feature two levels of basement car parking which will accommodate 138 car parking spaces including 12 visitor parking.

The DA highlighted that residents of the proposed building will benefit from the ferry services, given the proposed ferry terminal at Victoria St.

“The proposed development is an appropriate density and mix of dwelling types to achieve the dwelling targets to accommodate the future population for Brisbane City under the Regional Plan,” said planners at RPS.

Stockwell has a number of established properties in West End, such as Riverpoint, which was completed in 2016, Muse (completed 2018), and Virtuoso the River (completed 2019).

The company has many residential projects across Brisbane, including apartments along Fish Lane and Dutton Park. They are also behind the controversial Boggo Road Gaol development, which was granted approval in 2021.

The new West End development will be one of their projects for 2022 along with another one in Noosaville.