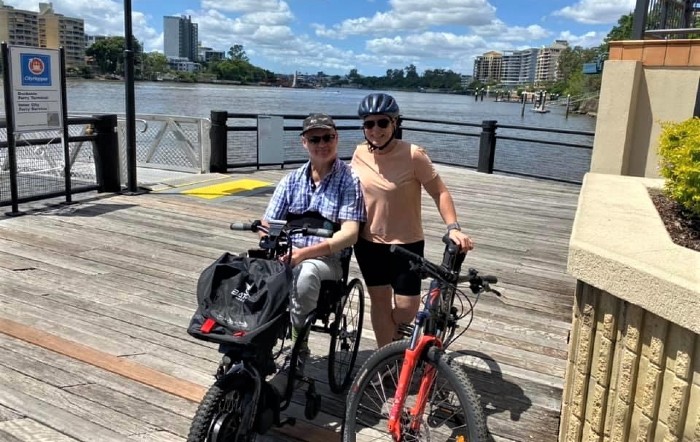 For the first time in 30 years, West End local Brad Kinsela is enjoying his independence and freedom after receiving his Batec, an electric attachable handbike/power assistance for wheelchairs.

Mr Kinsela, who is suffering from a spinal cord injury, got his Batec through funding from National Disability Insurance Scheme (NDIS). He uses the device to get around his local neighbourhood, visit restaurants in South Bank, go on bike rides with his wife and to travel to work in the city.

“It was the first time in 30 years that I had been out in the community, by myself, without any fears about going up a hill or getting stuck anywhere and I was just free,” Mr Kinsela said.

He was excited to share that he went out to breakfast with his wife the second week after getting the Batec. In their 20 years of marriage, it was the first time she walked beside him rather than behind him.

At first, he found it difficult to turn the ignition and clip the device on and off his manual wheelchair but he eventually learned how to do it. He’s glad that he’s pretty much independent now because he longer has any hesitations about going out. When he goes to restaurants, he just disconnects the Batec, park it, and sit at the table.

Mr Kinsela, an Executive Director with the Queensland Government, thanked the NDIS for the Batec, which did not only allow him to still use his manual wheelchair but also gave him the freedom that an electric chair does in terms of getting out. Carers Queensland assisted Mr Kinsela in applying for and implementing his NDIS funding through their Local Area Coordination Partner in the Community Program.

If you need assistance in finding more about NDIS, contact Carers Queensland on 1300 999 636, or cq.enquiries@ndis.gov.au.

The NDIS provides funding to eligible people based on their individual needs. Every NDIS participant has an individual plan that lists their goals and the funding they have received.

To learn more about NDIS and the changes the NDIA implemented during the Covid-19 pandemic(e.g. securing a request form, meeting with local area coordinator, and reviewing existing plans), visit the website at www.ndis.gov.au.